Airtel, Vodafone and Idea Network are Fined 3050 Crore by DCC 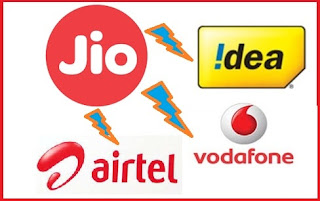 On Airtel and Vodafone-Idea, has to pay a fine of Rs 3,050 crore for not providing Points of Interconnection to Jio Network. Digital Communications Commission, the top decision-making body of the Department of Telecommunications, stamped it on Wednesday.

Airtel, Vodafone and Idea expressed their disappointment over the decision of the commission to impose a fine, saying that the decision of the DCC will have a bad effect on the telecom companies which are in financial crisis. The government’s digital India mission will also be affected. The Commission imposed a fine of Rs 1050 crore on Airtel and Vodafone. The penalty has been imposed on Idea worth Rs 950 crore.

Airtel said that after receiving formal information about the fine, they would raise the issue in the right forum. Airtel spokesperson said that we are very disappointed with the DCC decision. We gave Jio the facility of Point of Interconnect over the standard. Despite this, we have been fined. It is notable that in October 2016, Telecom Regulatory Authority of India had recommended the penalty of Rs 3,050 crore to Airtel, Vodafone, and Idea for not providing interconnectivity to Reliance Jio.

Note: This post is about Govt Fined 3050 crore on Airtel, Vodafone and Idea Network. If you have any query about this post then feel free to comment below.