Jio wins the battle against Airtel, Vodafone, Idea, and Bsnl

Telecom operator Reliance Jio’s doing its best and launching new attractive plans to customers every day. The company added more than 97 million users in the month of June. Jio left behind all other companies in June to add clients. 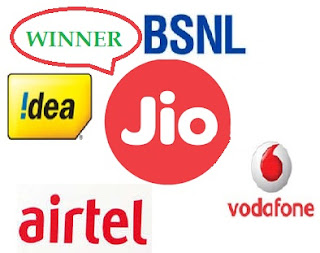 Now the total number of live users has increased to 215 million. Apart from this, the number of Airtel users has been the lowest. Airtel subscribers have increased just 10689 in the month of June. At the same time, Vodafone added 2,75,000 customers in June.

Apart from this, Idea Company has added 6.4 million subscribers in the month of June. According to the TRAI report, Mukesh Ambani’s company Jio and Idea hold 18.8% of the total market share. At the same time, Airtel and Vodafone Company have a 30.1% market share.

Note:  If you have any problem regarding Reliance Jio News Update: Added more than 9 million customers | Jio wins the battle of customers in the month of June against Airtel, Vodafone, Idea, and Bsnl feel free to comment below or just contact us.